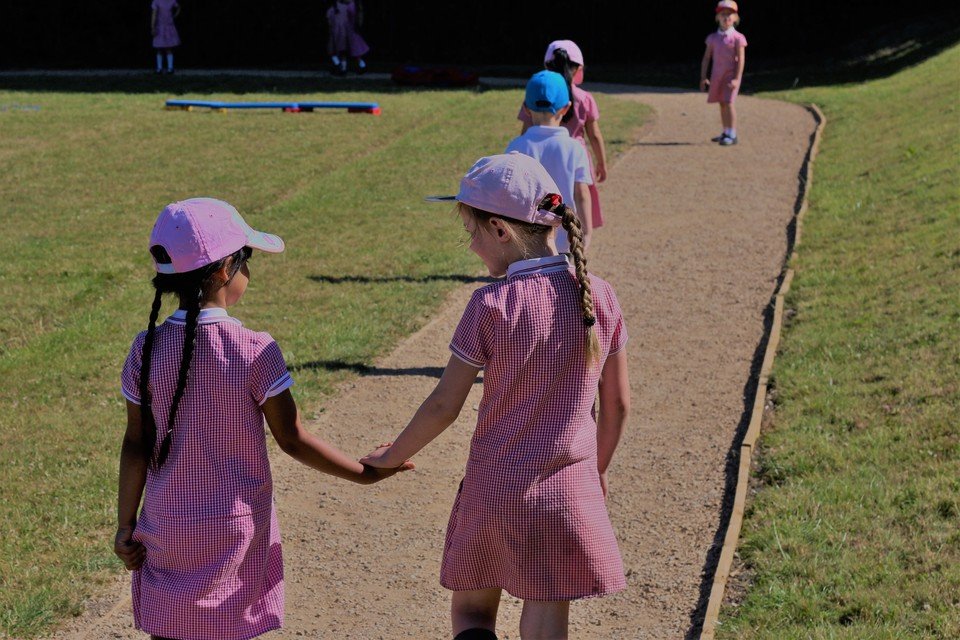 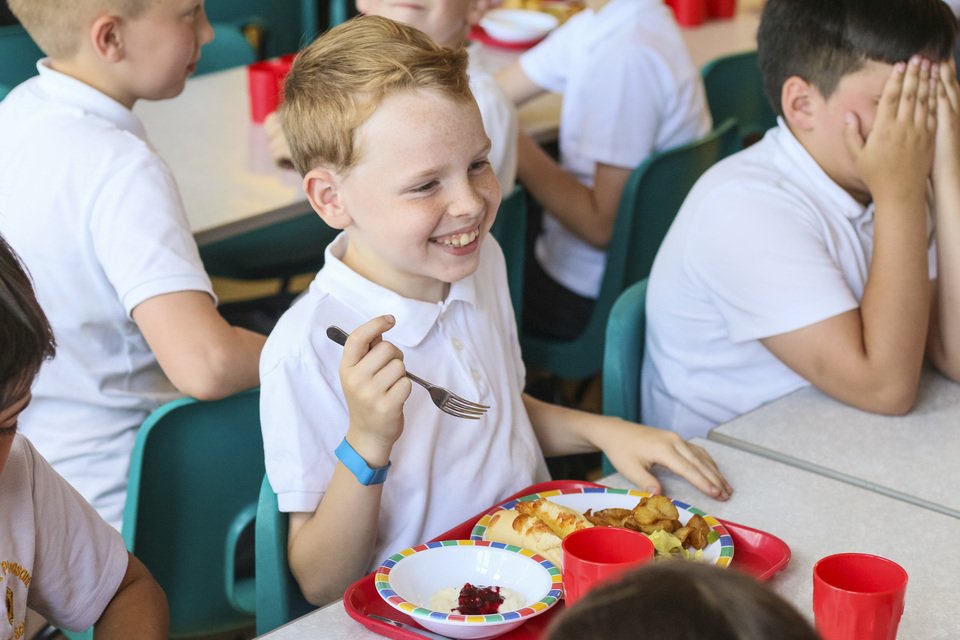 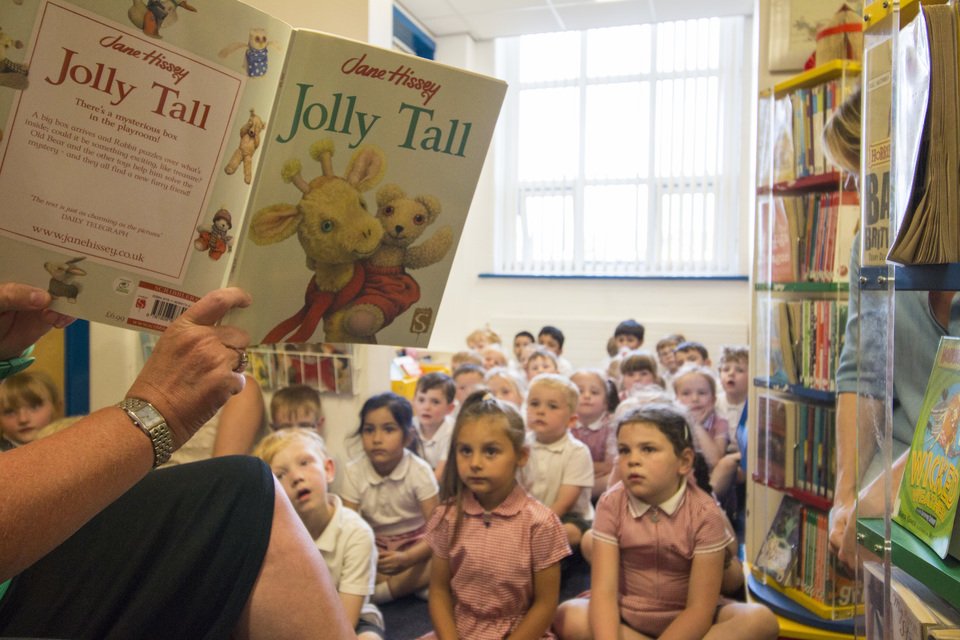 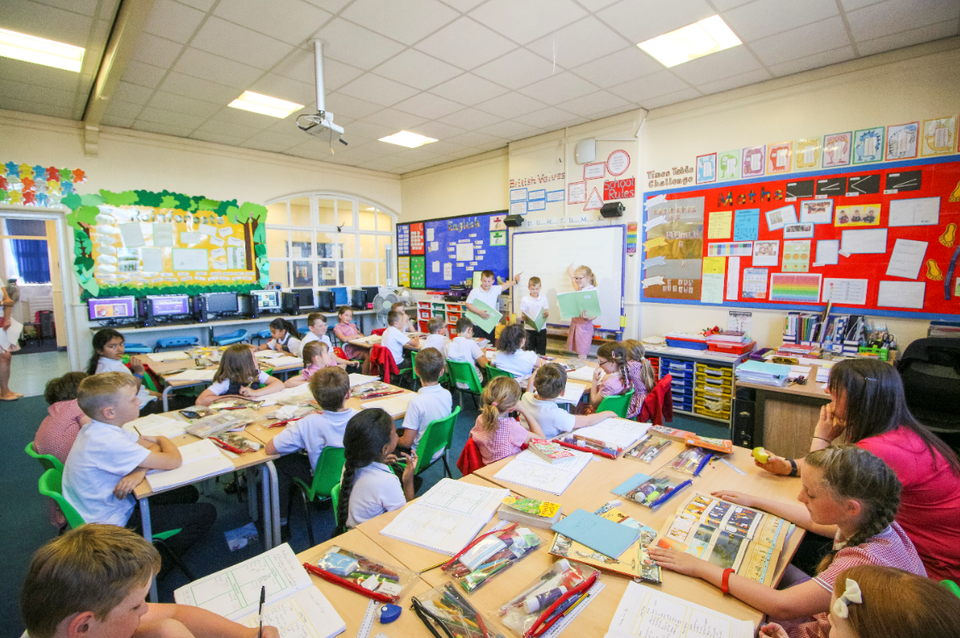 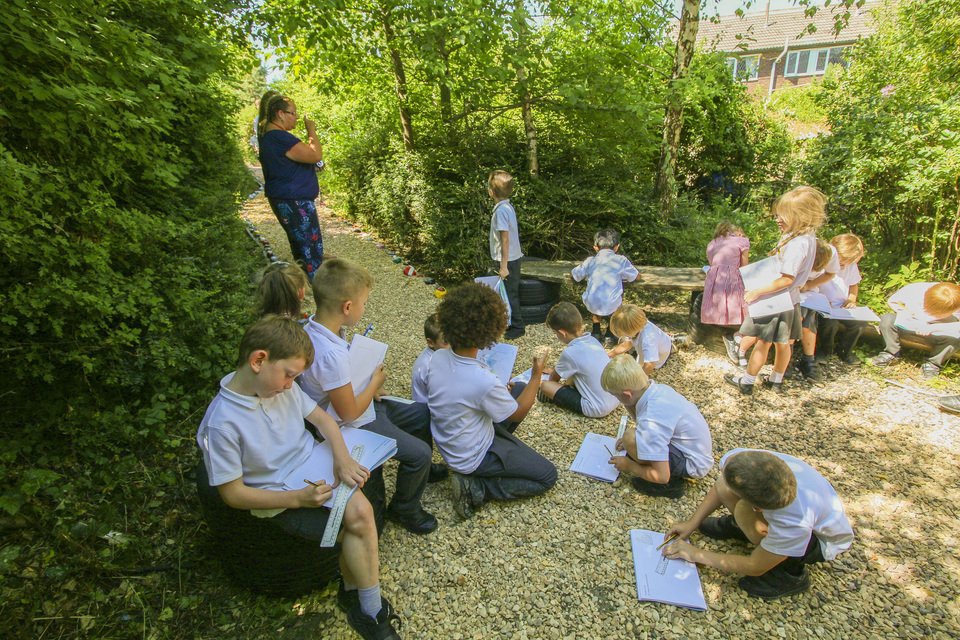 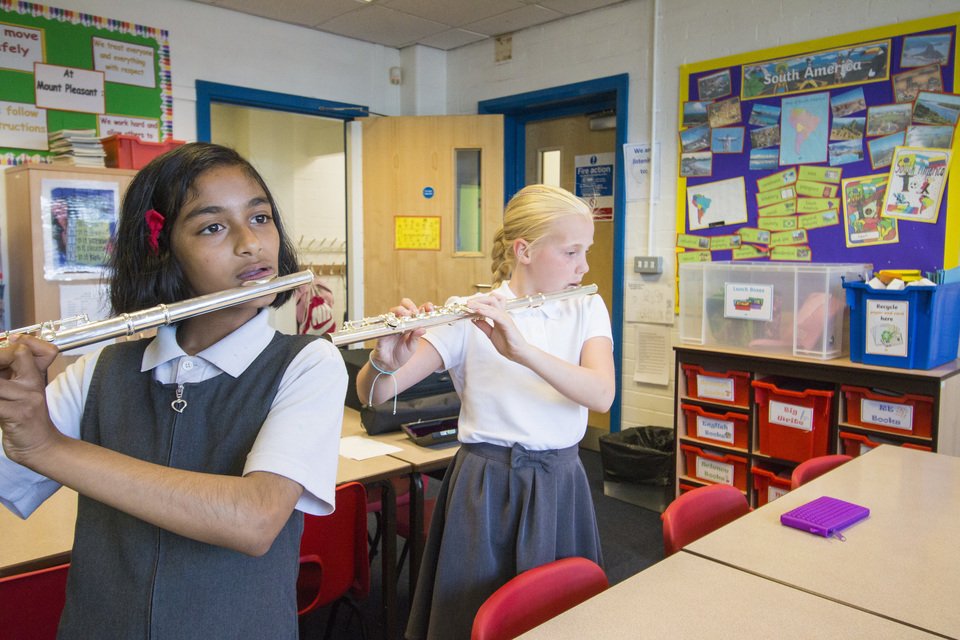 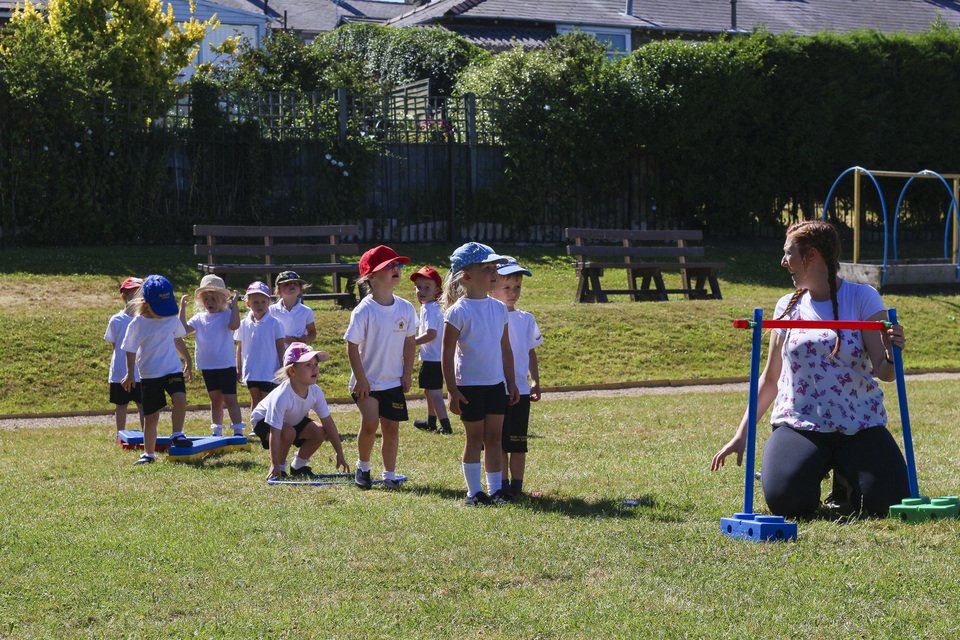 On Thursday 3rd October, pupils from Year 6 took part in a schools cross country event at Wilson’s playing fields, Clayton Le Moors .The conditions were extremely muddy , which made it even harder for the team. Not all of the pupils had done this event before, so some were quite nervous, while others helped them to settle their nerves down.

Nevertheless, we were all very excited to represent Mount Pleasant and to have fun, as well as trying our best. We all did a quick warm up before the races and we all cheered each other on. All of the races were vastly hard, but we all finished with smiles on our faces . There were approximately 120 people from different primary schools running in each race . We all did our very best to try and make the school proud .

The top boy, heading up the boys team placed 7th, whilst the top girl from the team placed 13th. At one point in the race, one of our runners lost their trainers in the thick mud.

Unfortunately, it turned out neither the boys or the girls team placed 1st, 2nd or 3rd on this occasion but we all enjoyed every moment of it. A couple of days later we all got presented with a certificate in assembly from Mrs Whittaker. I think that everybody was very proud of us and it was a very fun event!

On the 14th of January 2 boys and 7 girls from Year 1 and 2 went to Accrigton Academy to represent our school in a Dance festival.

Firstly they did a warm-up, they had to copy the instructor and then get into partners and make shapes using their body parts.

A few minutes later, they started dancing in partners, whilst using hula-hoops. After a while, each school had a go at an activity:

-Keeping the plastic balls on the parachute

All the children enjoyed themselves and represented our school really well.

Pupils from Years 5 and 6

Today we took part in a school cross country event including 17 schools and approximately 480 children at Wilson's Playing Fields, Clayton-Le-Moors. The conditions weren’t sunny bright skies but it wasn’t that muddy (well not as bad as last year) which still made it very hard. The pupils of Mount Pleasant Primary School were very excited to take part in this fun event. We stretched our muscles and warmed up with some running.  Some people felt very competitive and nervous for what was coming.  We tried our best and we all were quite successful.  We all finished with a smile on our faces and had a brilliant time.  Our team didn’t come 1st , 2nd or 3rd but we did come 16th  overall. WELL DONE MOUNT PLEASANT!

A few days later Mrs. Whittaker gave us a certificate that said well done. I think Mrs. Atkin is very pleased with us.

Atkin and Mrs Jeal we took part in sports such as: 2x1 relay,

was set out very well, easy to follow and the instructor was fun and

very helpful. After everyone had given their best performance in all

of the events, the scores were in and we had finished joint 4th with

The hockey tournament was held at Accrington Academy outside on the 3G pitch. Lots of schools attended and were split into 4 groups , 2 groups for the Hyndburn area and 2 for Ribble Valley area. Mount Pleasant A was in the Hyndburn 1st group and team B were put in the 2nd group.

Both teams played extremely well, team A won all their group games and topped their group. Team B won 3 and lost only 1 so it went to a nail-biting decision of goal difference to see whether they got through to the semi-final to meet team A. They had +5 goal difference, unfortunately St Nicholas had +16 and went on to meet team A. After a close match which resulted in a win for team A it was on to the final against St Mary's Langho A who had knocked out St Mary's Langho B in their semi-final.

The final was a very tough match as expected and a great effort was put in by all, unfortunately in the end it turned out to be a 4-2 defeat. After the final it was annouced that both finalists had luckily been selected to represent their areas [Hyndburn and Ribble Valley] in Blackpool in 2018!

Pupils from year 5 and 6 took part in a schools cross country event on Thursday 5th October at Wilson’s playing fields, Clayton-le-Moors.  The conditions were extremely muddy which made it very difficult for the team of 12.  Nevertheless the pupils were excited to represent Mount Pleasant and do the best they could.  This was the first cross country race for all the pupils and we all felt very nervous before it started.  We practised our running on the muddy field before it started and this helped to settle our nerves.  The races were really tough and there was approximately 110 other pupils running in each race.  We all did our best and finished the race feeling really tired.  Ashton Heywood was the pick of the bunch, finishing in 8th place in the boys race while Lucy Dean headed up the girls team with a place of 31st. At one point 2 pupils lost their shoes in the thick mud. We all finished with a smile on our faces which means everybody enjoyed it. Unfortunately our school didn’t come 1st , 2nd or 3rd but a couple of days later Mrs Whittaker gave us a certificate and said well done . I think Mrs Atkin is very proud of us .

On Monday 13th November 2 teams had been chosen to represent Mount Pleasant at Accrington Academy. Both teams played 4 games against lots of other primary schools in Hyndburn.  Most of us had not played basketball before so it was quite hard, but we quickly got the hang of it after a couple of matches.  Team A was:

This was the first Basketball tournament that Mount Pleasant have been part of and all the pupils did really well.

On the 6th/7th February 2017, all the pupils at Mount Pleasant Primary School participated in an inter-planet New Age Kurling Tournament.

This is a sport that requires participants to deliver stones from one end of a court to a target at the other end of the court. The competition is to get the stones as close to the centre of the target in order to get the highest score.

The target contained different marks. The outer ring had the lowest number of points and as you got closer to the middle they got higher.

It can get quite competitive as opponents can knock your stones off resulting in scorning no points at all.

The final positions were as follows:

Everybody really enjoyed playing and some people wanted it as an afterschool club.

Seven pupils from year 5 and 5 pupils from year 6 were entered in the relay race, 2 by 1 race, 2 by 2 race, vertical jump, speed boost, javelin and five strides field events. Harvey Dillon won his heat in the javelin and vertical jump. Ben Hall won the speed bounce scoring an excellent score of 55 in 20 seconds and Amy Taylor won the speed bounce for the girls. Everyone put in a brilliant performance.

Unfortunately, we didn’t qualify for the championship final but the team put 100% effort in and really enjoyed the event.

At the start of the event Amelia , Maddison, Millie and Grace took place in the girl’s obstacle relay the girls were amazingly fast and quick ran their way into 2nd place. After that it was time for the boys to race; the boys had a fab team that included : Mackenzie, Dawson, Ethan and Oscar, they were also very fast and they jumped the hurdles like a piece of cake.  Proudly they got to 4th place and it was well deserved. Both the girls and the boys team showed great enthusiasm and did well.

In the relays everybody tried their best and showed excellent team work skills, Amelia Oats and Grace achieved 1st place well done girls, we are all proud of you!!  There was also a lot of 2nd places which Is a great score and again a score to be proud of.

I couldn’t clearly see the javelin but I could tell they were doing amazingly. They threw the javelin stick like it was a feather.

Everybody tried very hard and fair but sadly we didn’t get 1st place in this event but at least they tried their best and most importantly had fun and worked together as a team. They all proudly represented our school with excellent enthusiasm support and motivation to do well.